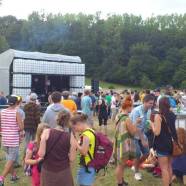 The Big Chill – A Parent’s Review

I have just discovered that taking two small children to a three day music festival is a pretty gruelling endeavour, even when there is some cheating (i.e. hotels) and a couple of adults involved.

As my colleagues will confirm, I had been banging on about going to the Big Chill for weeks in advance. Having gone with my wife once before the children arrived and once subsequently with just our eldest a few years back, we thought we’d give it another go this year. However having been previously – and knowing that it’s also known as ‘the big hill’ on the basis of the walk between car parks and camp sites – we thought we’d do ourselves a favour and stay at a local hotel.

The event was great. I’ve seen lots of detractors this year based on the acts and attendees – but personally I went with different expectations.

Firstly the fact we stayed off-site meant no drinking. Also the mild parental terror associated with the potential for small people to wander off in large crowds whilst one’s back in turned for half a second meant that I was just planning to be 100% attentive to them throughout.

Moreover, I was fairly indifferent about having to trek from one place to another to be in a certain place for a certain time to see a specific act, with the full entourage in tow. To be honest, I’m not even sure this is about being laden down as, in my experience, trying to be somewhere you’re not at a festival is a recipe for ongoing disappointment.

So, we just settled into it, with the occasional loose plan that would be happily sacked off at a moment’s notice if something else remotely attractive (i.e. a bacon butty, or spot of papier mache) was closer at hand.

We did have some great highlights, ie my youngest running around to some reggae with a little guy she’d just met at DJ Food on the Friday. Aloe Blacc was terrific – the little one was asleep in the pram and I bounced up and down like a trooper with my eldest on my shoulders for an unprecedented ninety minutes, whilst my wife wobbled about on a crash barrier, desperately trying to catch his eye.

Late Friday night we walked back via the main stage and caught ten minutes of the Chemical Brothers, which was crazy. By this point we were all wiped out – but there were lots of high fives aimed in the direction of my sleepy child (who, it’s fair to say, loves a bit of Hey Boy, Hey Girl) from the assembled mashed-up ravers.

Saturday was a bit of a washout, although I’m proud to say that we left a few hours before Kanye – who we later learned was vilified by pretty much all in attendance for his ego-centric postering – and Sunday was another good day, topped off by dancing around to Norman Jay, again whilst carrying little people around on the shoulders.

I did have a few drinks on the Sunday but otherwise we waited until getting back to the room each day before treating ourselves to a nightcap (nb – I think I may be the first person ever to have a glass of port at the end of a day at a Festival). The kids have come home thinking that eating crisps whilst soaking in a bath to get rid of the manifold substances under their fingernails is the height of luxury. And we have found a new passion for making sharks, fish and star wands out of soaked willow, tissue paper and cling film. No really.

As we hoped would be the case, it was one of those weekends where you can look back on loads of happy memories about family life. But my god, it was hard work. Pushing a pram with one dead weight with another on the shoulders for 12 hours a day takes its toll.

But that all fades of course, whilst the pictures that feature big grins and our respective memories all endure.

So, would I recommend it? Yes absolutely – but only if you’re prepared to go as a parent, not to try to be a festival go-er in the sense that it’s typically thought of, as that way lies madness in my opinion. Also, I’d strongly advise you to start thinking about weight lifting training some time in advance.

(NB – Normally I don’t write about my kids here or anywhere else – I just choose not to until such a time as they can decide for themselves – but I’ve justified this to myself on the basis that this post is more about being a parent, rather than my kids specifically. So I guess it’s OK.). See more pics here.

← An Appendix & The Rapid Rise of G+ Console Agoraphobia →