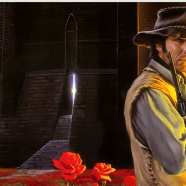 Recommended, very strongly, by a friend who couldn’t believe that I hadn’t read them, this is easily the longest story I’ve ever read. Honestly, it’s a little too self aware and pompous in parts (with King introducing himself as a pivotal character for example) and some of the vocabulary that the author has devised for this story grating at times – but there are long passages that are truly engaging and brilliant. And, although I’ve yet to read the just-published interlude, that sits between books four and five, as with the best books, the pleasure at having finished is inevitably followed by a sense of loss.

Roland, The Rose & The Dark Tower

To be honest, given the size of the thing, that has really surprised me – I found book six and the early passage of book seven heavy going, possibly just because I had fatigue with the series. But as the Gunslinger character draws towards the end of his journey to the center of all things, the last book markedly improves. The text remains dense but, possibly spurred on by the end being in sight, the final 700 page book (that could have taken six months to read alone in other circumstances) whipped past pretty quickly in the end.

I wont spoil the plot for anyone that has either yet to read it or yet to finish but suffice to say that the build up of suspense did suggest itself as the point of the series, rather than it being the conclusion.

I think the most impressive element of the achievement is not that these books manage to unify characters, places and actions from many of Stephen King’s many other works – but that he wrote the seven books over a 34 year span, beginning when he was a teenager. Hence, in preludes, afterwords and other articles, he really refers to the characters and storyline as entities that he’s lived with for a huge proportion of his life – and as though they genuinely exist outside of the author’s imagination and writing.

With apparently 40m copies sold across 30 countries, quite a bit has been written about these books – from Stephen King considering rewriting them all, possibly removing himself (suggesting his unease at this device), to the ongoing saga of filming the unfilmable and the interconnectivity of many references in these and other King books. There’s also a Discordia game based on the official Dark Tower site.

The best news for me is that I can now turn to the comics – written by Peter David and drawn by Jae Lee – which I have held off doing to avoid plot elements of the novels until now.