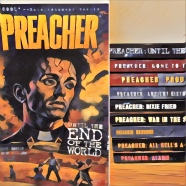 The Trick In Adaptation

Here’s the thing: these days, a huge proportion of entertainment media is adaptated – and I’m rapidly coming to the conclusion that adapting a book or comic to another format, particularly TV or film, must be a largely thankless task where it’s virtually impossible to please both the material’s existing audience and a new audience in equal measure.

Think about all the adaptations you’ve seen, read or heard (and, the more you think, the more you realise the number of works that actually started life in a different format). Even if it’s a completely faithful adaptation, the newer version often doesn’t quite ring true of the original. Unless the adaptation simply fails to meet expectations (ie it’s executed poorly) – or tells the same story a different way, inevitably alienating some proportion of the original fan base – I guess this disapointment must be down to the active role of the reader/viewer’s imagination in the process of taking the story on board.

I can think of several recent TV series – and numerous films – where this is certainly true for me. For example:

Preacher – this is a beloved comic and one that I often lend out, buy for a friend or cite as a great starting point in comics generally – particularly for broadminded friends. Some of the casting of the TV show was great – Cassidy and Jesse in particular – but some was so wildly off-piste that I couldn’t handle the deviation from the source material (Tulip). Also, the comic is brutal, visceral, crude and ridiculously funny. Much of that was lost in the transfer to the TV series for me, particularly the humour. And the less said about the last episode of series 1, the better.

American Gods – I’m a huge Neil Gaiman fan, having re-read the book recently (review here). I’m halfway through the first series so can’t give a fully informed view – but the series seems to hang on the casting of the two leads, with the treatement of the work’s overall themes (the scale of America, the role of faith and belief) handled, in my opinion, in a relatively clumsy way by comparison to the elegance of the book. In short, sections which should pull together the story and give clarity to the overall subjects are jarring. Although it’s hard to take your eyes off Ian McShane as Mr Wednesday.

Watchmen – This is an odd one. In many regards this is the perfect adaptation. It’s a hugely faithful, scene-by-scene recreation of the comic. Camera angles perfectly mirror certain comic panels (ie Comedian being pushed through a window, Rorschach in prison etc). Yet, it’s just not quite right, meaning that whilst it’s easy to like it, somehow it’s hard to love it. The only conclusion I can draw is that it’s a story that’s better suited for the comic format. Or perhaps, having already told the story in a comic format, it just gains very little having made the transfer to the big screen.

There’s the argument that the adaptation draws in a new audience of course – and even for critical fanboy nerds like me, surely that’s absolutely commendable, whilst also providing the commercial rationale for the adaptation in the first place?

It’s interesting that the above is true irrespective of the involvement of the creator of the original – Alan Moore’s well documented views aside, Garth Ennis fully endorsed Preacher and Neil Gaiman did the same the American Gods.

Inevitably – there are the exceptions:

The Lord of the Rings – Peter Jackson achieved the seemingly impossible in making the “unfilmable” trilogy. Both (largely) faithfully recreated yet somehow as kinetic, engaging and enjoyable in the new form, I can’t think of many films where I might actively seek out the four hour version over it’s much shorter counterpart. Even so, I don’t think many fans of the book trilogy would argue that the film bettered the written experience.

The Stand – A beloved Stephen King book, which is still apparently unfilmable, having gone through various phases of development hell, including changes of format, re-casting and re-writing, since the 1980s. It’s a massive work, with huge themes but, given the success of the Walking Dead, would be a sure fire hit if the casting and direction were to be nailed. Yet, it remains unadapted for screen. However I recently found a brilliant adaptation for comics. It’s pixel-perfect faithful, easy to read and, for once, seems to complement the source material, with the benefit of putting faces to names – it’s a huge cast of characters – which helps the reader the follows the numerous narrative threads. At the time of writing, it’s about £20 for the six collected volumes of the e-book format on Amazon, so it’s great value at around 1,000 pages.

Looking at it from the other side, there are clearly many adapted versions that I’ve seen or read before experiencing the original. Kick-Ass and Kingsman being two comic adaptations that I’ve seen on screen without having read the comic. I didn’t fall in love with either one frankly, so it’s bit of a disincentive to seek out the originals.

So, with first film adaptation of Stephen King’s Dark Tower series due shortly – and expectations sky high given the stellar casting of Matthew McConaughey & Idris Elba, it will be interesting to see how this pans out. The script is a re-write of various scenes from various volumes – but I’m optimistic that this needs only to be faithful in spirit, not in detail, in order to succeed.

One final punt, this terific book has been adapted by Amazon into a pilot – and renamed Oasis. Whilst I haven’t seen the TV show yet, it’s clearly been well received (8.3/10) so has to be worth a look to see how this tricky project has been realised for the screen.

← On Creative Writing The Joy of Kickstarter →