So there I was, congratulating myself for not having spent any money for three or four days – until it occurred to me that although I hadn’t spent any cash money, I had downloaded a TV series to my tablet, rented an HD film to my laptop (which I then played via the TV), downloaded a multimedia children’s book, again for a tablet and, finally, about four or five books and short stories to various devices.

So, in other words, I had actually spent about £40-£50 on digital media in about a 72 hour period, seemingly without noticing. 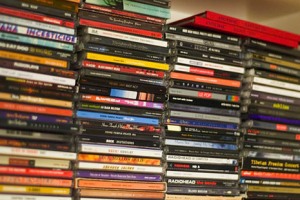 Similarly, I’ve been battering Spotify for many months now. Having first joined way back when the service first came to the UK in 2009, I started buying the Premium service about a year ago and, for the first time in my life, have consequently entirely stopped buying music as physical media. Effectively the combination of ready availability and increasingly decent wifi coverage makes this an ideal phone app – and easily the one I turn to far more than any other, even Facebook.

Also, despite having hundreds of DVDs and blu-rays, my purchasing habits there seems to have slowed right down too. The aforementioned TV series purchased was a special offer of The Thick of It, which I already owned on DVD aside from series 3. The fact I was a) willing to pay again and b) motivated by having a decent quality digital copy rather than a port from DVD – which is shaky at best, legalities aside – demonstrates a fairly tangible shift.

Thinking about it, this constant change in what is the preferred media is a long term issue, which lends itself to countless re-purchasing of the same content. Although this move to physical media-free content is the latest shift, the trend is hardly something new – I recall owning about three copies of the original Star Wars films, firstly on video, then special edition and finally DVD, before the recent blu-ray versions even came out.

Still, I must confess that although I’m happy to lose the box for music and movies, the same can’t be said for books. I admit I’m starting to read more via the Kindle and Google Play apps on various devices – but whereas I’d be fairly happy to see my CD and DVD shelves empty, provided I had access to the content, I just can’t imagine a world with no books (although it could arguably be somewhat improved by a major reduction in CDs, DVDs and the associated packaging).

If nothing else, I reckon it has to be a good idea to give the eyes a rest, away from a screen for a couple of hours each day.

← Flags or No Flags? An Early Start →