I’ve just found a terrific keyword research tool which looks like it might save us a good deal of time and hassle moving forwards – www.advancedwebranking.com.

We have been put onto the service by an industry contact and I’m always a little sceptical about using automated services, not least when we currently take a great deal of time and effort to manually measure and monitor on a weekly basis. But then that’s the point really, are we willing to sacrifice a little accuracy in the name of saving a great deal of time that could be usefully employed elsewhere on the same account? And is a client?

The argument is made a little more interesting when you consider that actually the search engine ranking results which are served up are arbitrary anyway – what one of the team sees at one desk can be markedly different from either the same machine at a different point in the day, or a colleague sitting next to them at exactly the same time.

The accepted standard therefore amongst SEM pros seems to be that where measurement is undertaken manually, provided it’s done relatively consistently – ie at around the same time from the same machine, in the same location each week/month, then that provides at least some level of assurance that the findings are based on solid ground.

What all of this means of course is that what we take for accuracy is actually only the best attempt at accuracy given the number of variables – and therefore the argument about whether to move from manual monitoring to automated monitoring of SERPs becomes far easier for me.

For sure, in the short term, we’re not about to simply stop manual monitoring overnight – and to a certain extent it’s currently unknown whether the clients (Punch included) will accept the auto generated reports or whether we will still need a degree of manual intervention to extract the relevant information from the automated version in order to create reports in our preferred formats. Yet given the acceptance of the way that Google analytics reports – I have ours set up to automatically generate and send an overview report once per week – I suspect that this will be absolutely fine.

One interesting and potentially beneficial point about the ranking tool is the fact that the information can be dynamically analysed, which is a distinct improvement on our manually generated versions, with the ability to generate pivot tables etc.

Another key benefit is that additional search engines can be added to the results. Historically we’ve only really regarded Google, on the basis that Google and Bing’s results are relatively closely matched for many searches given the engine’s respective alghorithms. And given Yahoo’s declining market share I think it’s only a question of time before the recent deal with Bing results in Yahoo results becoming an irrelevance to a greater or lesser extent. However, we now have the ability to know, without tripling the workload in the process.

As with the first time any user views photoshop, it’s hard to know where to look first, an initial attempt to login is a little bewildering – but the Advanced Web Ranking wizard is simple enough to plug the relevant information in and set running. Then, as with any relatively sophisticated programme, the key is to fiddle around the with information in a quiet moment, in order to develop an understanding of what the key components are and where to find them. Personally I’ve always found that I use a relatively small portion of any software’s overall functionality – particularly when there is a great deal of complex functionality – so I’m in no doubt that once we have had a little more time together, maneouvering around the interface will become second nature.

One area where I’m not currently 100% clear is the extent to which the results given are IP tracked and/or geographical location specific. Certainly it’d be useful to have greater visibility over this as a definite flaw in the manual reporting process is the fact that, by default, someone reporting manually has to be physically based somewhere, whether in one country or even, like me, moving around a little. Again, this ties in with the above point that consistency is the only way to provide some stable basis for reporting – but I’m hoping that with a little more play time, I’ll be able to run so geo locational searches, which will be a great additional layer of data to analyse and provide.

Finally, I should mention that I’m also playing with the web ranking tool’s sister product: www.advancedlinkmanager.com. We’ve been using a backlinks tool for some weeks, which provides a good level of information on link popularity – however I’m keen to run some comparative tests to see whether either one fares better than the other. With just a few clicks it’s easy to see where your competitors have backlinks and you can therefore target those locations. You can view the information pictorally or in lists and it’s pretty easy to use.

As with all time and labour saving tools, the key is to find the time to be able to give them the attention they deserve initially. The issue of course can be that it’s impossible to know in advance whether that time has been well invested as it’s impossible to make a sensible judgement about whether something represents a better alternative to whatever current process is in place, or not. Whilst it’s very early days in my use of both tools, common sense suggests that given the number of SEO campaigns that we now run, it will be well worth making the time to use these resources in the long term. 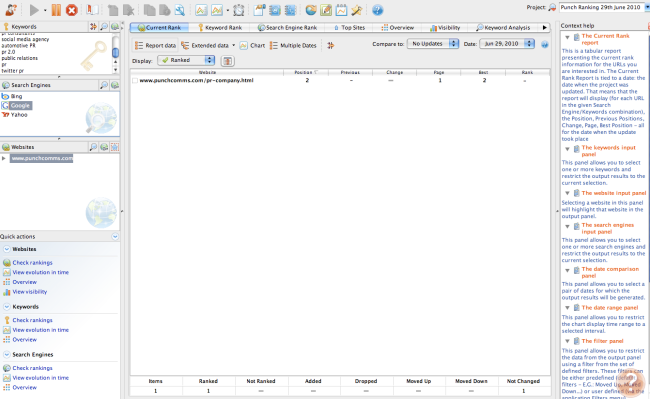